House of Lords passes the Dutch on the left hand side

I'm something of a Carlton Reid fan—I buy his books anyway—and I'm full of admiration for the tenacity of his career as a journalist covering the cycle business. He is to my view somewhat over-enthusiastic about the merits of separatist cycle infrastructure, but this is a matter for reasonable debate, and at least he does actually ride a bike. So I'm inclined to forgive him when I revisit his site bikebiz.com, and find that a comment that I left on a story he wrote in April 2017 about some clueless peer's ignorant waffling in the House of Lords has disappeared. Comments often seem to be the first casualty of website design makeovers, and in this case archive.org seems not to have come to my remarks' rescue. So here they are again, now with illustrations.


This idea of the Netherlands as some sort of transport paradise really does need a dose of reality. Firstly, while their overall road mortality compares favourably with that of other European countries, they're hardly immune to road deaths. 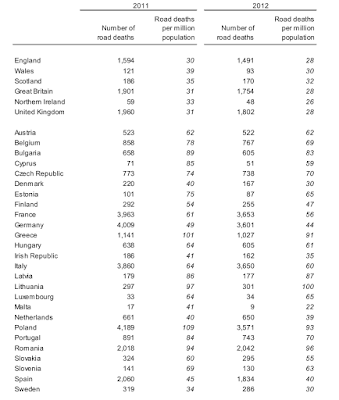 All European countries observed a decline in cycling as cars became widely available in the sixties and seventies. While the Netherlands are to be congratulated for arresting this decline better than most, they have not grown cycling since. 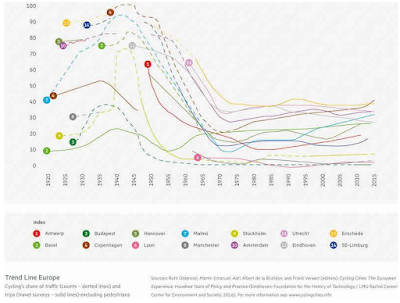 Yet in global terms they do occupy one of the most favourable topographies for cycling on the planet.The solution they found back then—of rigid separation of modes—has its virtues, but cannot be unquestioningly adopted in other localities—might hills make a difference for example?
Since the seventies, motorists have not improved their reputation: the ongoing road slaughter, oil wars, an obesity crisis, and pollution episodes can all be laid directly at their door, even before we consider the contribution of motoring to anthropogenic climate change. More thoughtful parliamentarians would be considering how to kick the motors out altogether, not bleating about a few cycle paths.


This seems a good place to note that I consider the House of Lords to be an insult to the notion of democracy, and I'd sack the lot of them if I could. Confronted with such evident idiocy in the legislature, it is natural to wonder how the hell to get rid of one. Answer: you can't. Dictators Peers for life! Ho hum!
Publié par Douglas Carnall, @juliuzbeezer à 11:33