Tickling the Dawes' nether regions back to life

from the threadbare department

The Dawes has been out of action since the end of May, when, feeling a nasty wobble in the cranks while riding out to meet the lads in Cherbourg, I looked down to see my bottom bracket almost dragging along the road. Investigation at the local bike shop the next morning revealed that the threads on the bottom bracket shell of the frame had rusted through: a potentially frame-ending injury.

I ran home for the town bike, which is a more or less acceptable substitute for the Dawes up to about 70km, at which point the lack of variety in hand position starts to become fatiguing.

Anyway, when I got back from the trip, Yoann Loncle of Menhir Cycles was ready to take a look, so I stripped the frame down and sent it off to him. Great craftsmen do take their time, but the repair of the frame (there were a couple of cracks in the stays, and the rear brake bridge had cracked through on one side) was finally completed last week, so it was time to rebuild the bike with the new Kenli bottom bracket. This sidesteps the need for a framebuilder to replace the entire bottom bracket shell, but there is a reason why threading the bottom bracket securely to the frame is superior...

First time around I just bought a second Shimano-fit 20-toothed socket tool, and tightened the Kenli as best I could. However, it came loose on a 10km test run to test the fit of the reassembled machine. I retightened it, but next day's planned ride to Saint-Nazaire (64km) had to be cut short in Couëron (13km) when it loosened again.

More serious measures would evidently have to be taken. Browsing around Sheldon Brown and the archives of uk.rec.cycling yielded some helpful info, but I didn't fancy using metal filler (which is basically glueing the unit in place, probably irrevocably), and 'tapping the thread to Italian fit' and suchlike is certainly beyond my capacities, and I think, those of any known supplier.

So I decided to try obtaining a snugger fit for the Kenli with shims. This is illustrated in this Flickr set. Here's a picture of the new left shim in place: 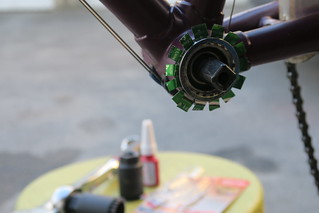 The shims did seem to give a bit of extra added grip as I tightened the bottom bracket, and I added some Loctite 243 to the Kenli's threads for good measure. Fingers crossed! My legs are awfully powerful and I do feel sorry for any bike component that's got to deal with them. A replacement for the Dawes is becoming a pressing necessity, but I've had a lot of fun on that bike down the years, and I'm finding myself reluctant to accept its demise.

Update 22h18, 19 October 2018. First ride out on the repair entirely promising—maximal mashing of pedals on a 20km loop out through Vertou this afternoon—all seemed solid on my return.
Publié par Douglas Carnall, @juliuzbeezer à 14:33 Aucun commentaire: