I do like Twitter, but the number I'm following had crept up to almost three hundred. Inevitably at this level attentional scotomata will occur, so merely as a matter of survival, I've been trying to cut  down the number of tweets I receive.
This evening it occurred to me that if you've got more than 2000 followers, you've got enough attention already, and if you do something really great, it'll doubtless be retweeted my way. And after all, you should really save your love for those that can love you back.

On not shooting your stockbroker

If Attila the Stockbroker were to listen to today's Democracy Now! his response is easy to predict:"HANG THE GOLDMEN BY THEIR SACHS!"
— David Rovics (@drovics) July 9, 2012

I've only ever seen David Rovics perform once—at a squat Vortex gig in Stoke Newington c. 2005. It was a interesting night for many reasons, and so I've followed him since, as you do on Web 2.0. A while back he shouted out online for someone to read his memoire, and so I volunteered. He was kind enough to say that my comments on the manuscript were "the best, most useful feedback i've ever gotten on anything" which was a nice compliment. He also turns out some thoughtful blog posts.
All this throat clearing is a warmup for saying: "Artists: please do not promote violence! There are enough criminal idiots in the world without you joining in!" By idly proposing actions no sober person could agree were just, such blustering makes it less likely that effective action against the bankers, such as prosecutions for fraud, will take place. Much the same phenomena was observed with prosecutions over the Iraq War and torture. Comment threads were ridden with so-called anti-war commenters whose favourite lines were (if they had their way they'd) "string 'em up" or "send 'em to the Hague," the utter plonkers. Bless! When laws have been broken there should be no need to summon the mob. To do so, is in fact complicit with inaction on such major injustices. The truly radical artist makes calm (and devastatingly accurate) calls for justice to be done.
Hmm. Whatever happened to that Chilcot Inquiry then? Iraq War all quietly forgotten? Not in Cabinet Beezer it's not. 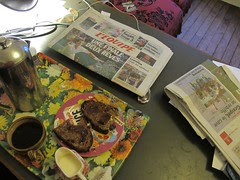 breakfast of champions
Originally uploaded by Julius Beezer
I didn't naturally use to be an early riser, but these days you'll quite often find me at my desk before 0600h. This is nice as my office faces south-east, and I can watch the dawn appear on the underside of the clouds through the French (natch) windows.
If I've got paid work on, I just get right on with it: the concentration and calm that come after natural awakening from an undisturbed night's sleep are precious indeed, as is the feeling of already having cracked out more than half a day's work by eight o'clock.
If I'm not working for bucks, I'm usually on general internet patrol, curating links for my various interests, gathered through my RSS and Twitter feeds.
This morning was a bit different though. As part of my apprentissage en français, I have resolved to read every word of this year's Tour de France coverage in L'Equipe. Even with Thursday's strike, which blocked distribution of almost all of the national press, including L'Equipe, I was already a little behind.
Publié par Douglas Carnall, @juliuzbeezer à 12:33 Aucun commentaire: