Bayesian limits to screening populations for rarities e.g. "being a terrorist"

Silicon valley software engineer Ben Adida (36) certainly doesn't hesitate to grovel before his president in his recent blog post concerning the recent revelations of US state surveillance of the internet: ["...I’m no stubborn idealist... I know you cannot steer a ship as big as the United States as quickly as some would like. I know tough compromises are the inevitable path to progress... The responsibility you feel, the level of detail you understand, must make prior principles sometimes feel quaint. I cannot imagine what it’s like to be in your shoes..."] Yuk! The ship of state, with its concomitant all-powerful captain fully implied. Yuk, and yuk again, puke! But M. Adida does make a good point about the unintuitive statistical operation of true and false positives in population screening programmes, be they medical or criminological. The explanation he offers on his blog is correct, but lacks detail. More seriously, for anyone who'd like to know more, a couple of keywords needed to construct a quality search are missing. These were "false positive" AND "Bayes", so I decided to post a wee comment mentioning that, and a link to the best explanation I found. Perhaps M. Adida has just had enough of blog spam, but he seems to accept comments only very selectively on his blog: and mine was not one. Ho hum! Anyway, he's quite right to point out that even a good (say 99% accurate) test for a rare condition (e.g. being a terrorist) applied to a large, mostly innocent population will generate WAY MORE false positives than true positives. This has two bad effects: 1) innocent people are wrongly suspected and subjected to further unjustified intrusion and harassment; and 2) law enforcement time is wasted. You might suppose that intelligences sufficient to build data centres capable of archiving the whole internet would also be fully conversant with Bayes' Theorem. But with no meaningful oversight, how can we be sure? Idiocy is common; and mission creep happens all the time. Just like the Hackney wide boys who can't resist trying out their guns over the back hedge once they've bought them, the temptation to mine all that data must be well-nigh irresistible--but wrong.
Publié par Douglas Carnall, @juliuzbeezer à 16:38 1 commentaire:

There's a man called David Hembrow, a resident of the Netherlands, who enthuses about the virtues of the Dutch policy of taking cyclists round the back of every bus stop here. It seems he doesn't really like having his ideas questioned, nor in hosting an honest debate on the issues he raises, which would explain how his views have become so misguided. Ho hum! Here's my comment on his recent post anyway, which M. Hembrow had hoped to moderate out of existence:


These 'cycle paths' round the back of bus stops are exceptionally irritating: I've been negotiating the recently installed series on Brighton's Lewes Road in both directions this summer, and I don't like them one bit. Firstly: why does the cyclist go the long way round? In other words, why should the cyclist negotiate two additional bends and ride some extra metres at each bus stop on each journey? Then, as you mention, there's the usually inferior surface on the 'cycle path' to contend with, the kerbs, the bollards, the additional signage. But now, when I wisely ignore this evidence of local government idiocy, I get hoots and shouts from motorists for being in "their" space. I have no words for this publishable on a family blog such as this one! NO!

Plus: human factors: bus stop users expect traffic in front of them on the carriageway, but not necessarily behind them while waiting, or crossing the 'cycle lane' to the bus stop. So the prudent cyclist using such a 'facility' seeing people in the vicinity of the stop ***inevitably has to slow down.*** Meanwhile public transport users get to occupy a space with traffic whizzing by them on both sides: not good for parents of young children waiting at the bus stop.

Meanwhile, the real users of the road environment, the important people, the people who it's all for: the private motorists, continue on their sweet way, untrammelled by any consideration of users of other modes.

Proponents of these "dif-facilities" are misguided apologists for the triumph of the motor car, in Holland as much as anywhere else. Why else would they be so keen to place obstacles in the way of the cyclist, while removing cyclists' right to follow the ancient desire lines across the land established in antiquity?
If you must insist on modal separation on wider roads, then a 4-metre+ (i.e. generously wide) bus and cycle lane, which leaves pedestrians/public transport users on the pavement, and where the cyclist, enjoying a luxurious and tyre-swept lane whose only other occupants are accountable, professional drivers, has room to overtake stationary buses without changing lanes.

Naturally I keeps a backup copy of every comment I submit, for precisely these occasions: it's the comments that the blogger refuses to publish that are most worthy of heightened attention...

Update 21/4/17: Here's a good example of the kind of annoyance this arrangement generates for pedestrians (and any cyclist accepting the local authority's invitation to ride on the sidewalk) (via road.cc). (A bit sweary, your maiden aunt may appreciate you listening on headphones, if she's within earshot):

And here's a picture of the classic Dutch "round the back of the garage" arrangement (mustn't obstruct petrol sales now, must we?). Note the sharp blind curve it creates: 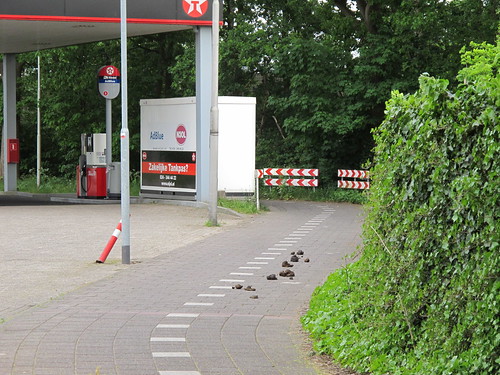