in February 2003... the anger which was being expressed during that month was not against the war as a military crime as such, but against the clear intention of the government to ignore or crudely manipulate public opinion in the pursuit of a manifestly unpopular policy. Consequently, it was the failure of a massive exercise in peaceful democratic protest to alter this course of action which provoked such disappointment.

We're in a post-democracy it would seem. But the need for regulation and justice between individuals and groups does not disappear.

Guardian blogger GP Wayne paints a depressing (but grown-up) picture of the collapse of civil liberties, and the outbreak of civil war as the unsustainable Western lifestyle caves in.

Le Camp Climat concept is taking off over the channel, just as it is in the UK. Activists campaigning against the proposed construction of a new airport 16 kilometres north of Nantes (Loire-Atlantique, 44) have announced a camp from the 3 - 9 August 2009.

The airport plans—a "hub" for north-west France—have a 30 year history. The proposed airport will concrete over 2000 hectares of traditional bocage: pastoral land divided by traditional hedgerows. By contrast Britain's second busiest airport Gatwick occupies a site of only 300 hectares. And all this despite 3 airports already operational (Nantes, Angers, Rennes) within 100 kilometres of the proposed site. None of the existing airports operate anywhere near full capacity, nor will they in the future if current air ticket sales continue their present downward trend.

Despite being beyond any reasonable concept of utility, the pharaonique project rolls forward, with forced sales of farms, homes, and land. Surveys and geological sampling of the site began in October 2008.

Opposition to the project is centred on two main organisations: the Camp Climat, and a coalition that unites resident groups called ACIPA, which has long pursued a civil campaign amongst the French bureaucracy.

As the threat becomes more imminent, many acts of resistance have already occurred: with tractor roadblocks and sabotage of survey works. A visiting official from the prefecture, come to announce the loss of land and homes, was flanned. The survey workers now work alongside an escort of up to sixty gendarmes. Eight activists face fines of up to 15,000 euros and sentences of 2 - 4 months for their part in the resistance.

The basic principles of the autonomous camp will be: a minimal ecological footprint, strong local links, strong media impact, educational activities and exchanges, development of networks, and communal living with food at prix libre (contribute as you can afford). The camp forms part of a week of resistance at the site with a music festival on the 1 August, and an annual local picnic on the 2 August.
Publié par Douglas Carnall, @juliuzbeezer à 03:28 1 commentaire:

According to the New York Times, the Spanish executive is considering limiting the powers of its courts to try international crimes. A team of Spanish judges led by Baltasar Garzón recently accused six senior Bush officials, including former US attorney general Alberto R. Gonzales, of violation of the Convention Against Torture.
Publié par Douglas Carnall, @juliuzbeezer à 14:23 3 commentaires:

You know things are changing when it's the Daily Telegraph proclaiming the revolution.
Publié par Douglas Carnall, @juliuzbeezer à 05:25 3 commentaires:

In the old days when people had PCs with data on, they'd pay money for reference manager software like Papyrus. Now there's CiteULike. We like.

It was surprising that there was no wikipedia page for Elizabeth Filkin, the former parliamentary commissioner for standards until yesterday...
Publié par Douglas Carnall, @juliuzbeezer à 02:49 Aucun commentaire:

One of the links to the right reads juliuzbeezer.

Of course, at first I had an s as would be conventional in choosing the name "Julius." The conversion occurred for a couple of reasons: I did want to make a slight inflection in my blogging style. For the last ten years or so, my on-line persona was, deliberately, as faithful to my real world identity as was humanly possible. Of the first few things I wrote, one in particular yielded personal information to the internet in a way that I judged would compromise my already flimsy tissue of anonymity to the point of pointlessness. So I retired juliusbeezer into what I'd hoped'd be, by internet standards, relatively quiet obscurity.

But my new identity: "M(onsieur). Julius Beezer" has been constructed to maximise my freedom of expression without compromising any desires I might have for privacy. There is also the issue of my former patients' confidentiality to consider.

You can probably still find out who Julius Beezer is without too much difficulty, but I've tried to separate out my online identities as cleanly as I can. If you do know/work out my true identity feel free to keep it as quiet as you like.

Anyway my juliusbeezer comments at the Guardian weren't backed up locally, because it was so convenient to nip back to the Guardian site and look it up. I may even have made a bookmark (control-D folks). Tonight I'm using another machine, I go to look... juliusbeezer is gone! His handful of textual comments on Guardian material seem to be have been retired from the Guardian site, though a single summary page of interests exists that at least acknowledges he once existed. The Ministry of Truth parallels are a little alarming. What else can I say? Put it back? You've got my email. You could at least give me a little notice so I can go and scoop my own jewels before you cast them into complete obscurity.

Kids! If it ain't backed up, it ain't worth crying over. Dive into the cloud and do no wrong! But ALWAYS ALWAYS backup! See you on the road!

Update 28 June 2014: Achieving industrial strength internet anonymity is more hassle than I have resources for.  In any case, I realise that the space between what I was willing to say as "Douglas Carnall" and what I was willing to say as "Juliu(s|z)|Beezer" was rather small, the difference merely a cowardly loss of nerve to be resisted if at all possible. And anonymous coward is hardly an admirable position. So I've outed Julius Beezer, and stand by his works, which are mine.
Publié par Douglas Carnall, @juliuzbeezer à 20:52 2 commentaires: 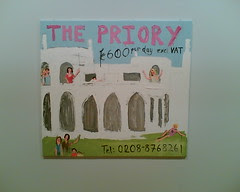 The Priory
Originally uploaded by Julius Beezer
I was propelled along to a Stella Vine show by a friend back in the summer of 2007. I like her paintings. They are colourful and naive but none the worse for that. I think I will always be interested in looking at her new works.
Publié par Douglas Carnall, @juliuzbeezer à 17:20 Aucun commentaire:

On not going to the Priory

By July 2007 I was feeling thoroughly bad-tempered. My sense of humour had failed. Various adventures had left their scars. I doubted my commitment to a considerable vocation. At least I was in need of a sabbatical. Some time off to reflect. I entered the faculty in October 1983. That would be 24 years man and boy. For the last 5 years I can't say anything I've read or seen professionally had truly given me joy or inspiration.

I had to make a move, simply for the sake of making a move. I wanted to move out of the war zone, set myself at one remove from Babylon. Count the ways it displeased me. But I was also, truly, a Babylonian. Exile is never easy. I had few local allies, perhaps enough, to survive a bit longer at least.

So I sold my house in London, and moved to France. "It's not a bad time to have cash," said my solicitor, pocketing her cut, a cheque for a flat fee of about five hundred pounds.

"I don't know why this transaction didn't cost me 50 pence on the internet," I replied. Perhaps not an entirely just remark (leasehold transactions can be complicated) but heartfelt. Anyway, the thing was sold, and the mortgage repaid, and the liquidation of navarino.net almost entirely complete. Along the way I had discovered all the cons of the internet, and some of the pros. If I did not suffer personally, I had had at least felt the joy of my initial liberty of expression dulled by both fear and boredom, the attendent need for "security." I nevertheless persisted, as much to goad colleagues as for any narcissistic gains. I do have an urge to perform, it's true, and the internet does offer many creative attractions.

And so, richer than I'd ever been, I packed my affairs into 9 cubic metres of cardboard cartons, and hoped they would survive on the truck to France.
Publié par Douglas Carnall, @juliuzbeezer à 16:08 Aucun commentaire: