Interesting typo in The Argus

No sooner do we arrive at the University of Sussex than revolution breaks out. In a heroic historical reenactment, a band of radical students have occupied the 3rd floor conference centre here in protest at plans to privatise some campus services.
I remain aloof from proceedings, for several reasons, not least that as a "campus spouse" I have no formal relation to the university, nor indeed any particular affection for it. That England can no longer afford to educate its young people without burdening them with a massive millstone of debt seems to me tragic and unjust, but that battle has already been lost, and occupying a poxy carpeted meeting room which is above the eyeline of every passing student, never mind the general public, is hardly going to change that. 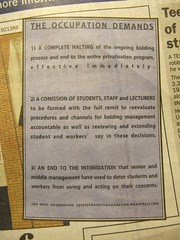 Still, they've managed to pull some high profile speakers to the now fetid atmosphere up there, and I finally yielded to the temptation of wandering along to catch David Graeber's talk in person. His book Debt: the first 5000 years is wonderful, particularly its demolition of the notion of "barter" as the primeval mode of exchange (chapter 2), and I was happy to pass him a fan letter. He is, of course, a very "out" anarchist, and the next day, as I got some cash, I observed that the occupiers had been so inspired by his presence as to publish a list of demands on an A4 flyer on the wall beside the cashpoint. The main entrance at the library was similarly adorned. And here it is, faithfully reproduced in the Argus, which still sells 18,000 copies/day.

So it is unfortunate indeed that demand 2) for "a comission [sic] of students, staff and lecturers" was in error. Firstly, these students are supposedly the cream of England's crop with regard to competitive A-level results etc., so if they can't spell, who can? Secondly, even if you can't spell (and I have more sympathy with you now that I grapple with French) you could at least run a spellchecker. But what is even sadder than this basic incompetence is the political failure that it demonstrates: if this document had been the issue of any kind of democratic process, this error would surely not have survived through into the final draft. I commend Jo Freeman's The tyranny of structurelessness to you all.
Publié par Douglas Carnall, @juliuzbeezer à 20:18 Aucun commentaire:

To the theatre of digitally-enhanced reminiscence

The birth of a new art form is a rare event, but I think I was in the delivery room last night when it happened. The most excellent and worthy Lorraine Bowen rediscovered Barbara Moore by a circuitous route (she has more fans in Italy than Bognor Regis) and has constructed a jewel of show around this venerable arranger of 60s/70s loungecore classics. In Brighton's small but perfectly formed Marlborough Theatre, Bowen combined the geniality, listening skills and good humour of the classic TV chat show host, with her skill as a magpie collector of digital bijoux, the whole cued and replayed through the iPad lying on the occasional table to her left.
Beyond her was Moore's throne, and beyond that was a Casio Privia piano, an entirely acceptable facsimile for the purposes of reminiscence. Moore's hands are elderly now, but they are still sure over the keys; the ravages of a forty year career as an enthusiastic smoker have destroyed her singing voice; the wandering charm of octogenarian reminiscence at times recalled the Hollywood axiom that one should never work with children or animals, and perhaps its extension to the senior citizenry; but all that is as nothing for the overall effect was utterly charming and powerfully moving: a worthy assault on the alienation and dissociation for which recorded music is so rightfully criticised.
Bowen's curation of Moore's oeuvre lacked a little polish in places—please place a piece of thick carpet under the keyboard in order that her tapping foot be inaudible, and replace her headmic with appropriately placed stage mics—but the authenticity and humanity of the piece—a dutiful elder daughter presenting the best of a much-loved but now aging parent shone through, and the audience response in the intimate venue was universally warm and appreciative.
Bowen has reconstructed a musical life; "Ooh, even I don't have this one [track]," revealed Moore, as Bowen delved deep into her iPad for another thirty seconds of Moore-arranged orchestrated vocal lushness; for those of us whose record collections are a heavy mass of charity shop vinyl it was a cheesy treat indeed.
This was a successful piece of live musical theatre, but it was more than that too. With an aging global population, and the coming singularity in which every element of culture, no matter where or when it originally took place, will be available for remix and replay, connecting all that into a digitally enhanced neo-reminiscence of an elder of the tribe feels like an exciting new form. We look back at how far we have come—and muse on how far there still is to go—and the possibility of easy, instant, digital playback makes the quotations from memory vivid indeed. Bowen has invented here a valuable, precious form which should be widely imitated on cold winter nights in cosy venues across the planet. 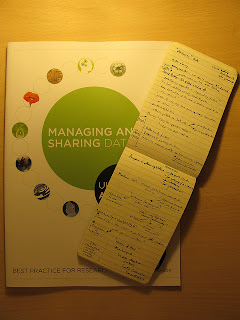 It seems one of the key questions in the contemporary philosophy of science: now that it is possible to share the data that underlie research studies, is there any reason not to? If a scientific idea is one that can be refuted or replicated, how can a scientist claim the right to hide methods and workings? Of course, before the internet and electronic data collection, such audit and sharing may have been notional. But if some keen German postgrad wrote to the department explaining how perusing an archive of old data might be useful to her, one imagines that, bona fides established, academic etiquette would have been to allow access. How pleasant to welcome a visiting colleague! And now that the internet is here, we can welcome colleagues from all over the world, right? Well, it's not so simple, as today's excellent seminar hosted by the University of Sussex Research Hive made clear. Louise Corti, a director at the UK Data Archive, sensibly bypassed the difficult ethical considerations that often underlie making data publicly available, and got on to that other substantial matter: the practicalities of actually doing it [3.1MB PDF] for your datasets. Many are the benefits; many are also the pitfalls. One has the impression of best practice in IT and archivism filtering out more widely into the body of researchers, as they avoid proprietary formats and adopt sensible file-naming conventions.

Janet Boddy's talk was more challenging, addressing as she did, the vexèd question of, given it can be done, should it be done? She's a social researcher who's worked with many vulnerable groups, and is also something of a research ethics guru (she is ambivalent about describing herself as an ethics "expert"). Thus is she fully conscious of all of the difficulties implicit in making data derived from personal interviews ("disclosive data") world-readable; she recalled her formative days in the not-so-distant past when destruction of the data at the conclusion of any study would be the norm. But she has also been greatly influenced by her pleasure and privilege in returning to Townsend's marginalia, revisiting his classic studies of poverty.

So there are no easy answers: citing Mauther (2012) that 'research works because respondents trust us,' Boddy pointed out that even the issue of consent for release of data was fraught with difficulty. For example, in a qualitative study where an interview transcript will form part of the raw data of the study, should consent for its release be sought as part of the overall consent prior to agreement to participate in the study? Or should the participant be shown their transcript before giving consent? One cannot even assume that the participant would wish for the data to be anonymous: the example of the proud oral history interviewee devoutly wishing that their name be attached to the record for posterity was posited. All this is tricky indeed: will an "extrovert bias" result from research participants having a post hoc right to censor themselves from a research dataset?

Of course ethical consideration must proceed any scientific act, but my own intervention, in the discussion after the talks, raised the question as to whether data that cannot be fully published are indeed scientific? What considerations of reproducibility and fidelity apply if a dataset is to be sealed from public view, or even destroyed forever? We are all too conscious of the data burial/publication bias problem in the pharmaceutical industry. Scientific fraud and research misconduct are well-recognised problems. Surely greater transparency of method, and opening datasets to outside scrutiny will be part of the solution?

A simple response from Boddy: since post-modernism struck, the concept of a "social scientist" is a highly doubtful one, and that ethical practice must be "reflexive, situated, negotiated." Peter Moss's notions of rigorous subjectivity make him the hep cat to quote apparently.

I found all this fair enough (I recalled wiping my consultation analysis tapes, for example), though I remain sceptical that the researchers formerly known as social scientists do not claim special privilege for their writings, which are, after all the result of method, and serious attempts to be thorough and avoid the worst pitfalls of all-too-human sketchiness and the jaundiced eye of prejudice...

But yeh, it made me realised that I've been charging along with internet now for the best part of twenty years, and the radical openness that is commonplace online is certainly meeting resistance in the social sciences, just as it does (rightly) in medicine. "Post it on the net and let the net decide!" may embody a certain hip hivemind egolessness, but it's hardly an archiving strategy; it's hardly even a claim to be a grown-up.  But in the era of silver surfers, ubiquitous smartphones, and pretty much universal network access, I bet research participants are more clued-up about the implications of data publication than researchers give them credit for.

After the formal part of the seminar I had a wee chat with the IT services guys at the back, who, once the fretful intellectuals have agonised sufficiently, must keep lights on and hard disk platters spinning. And backups. Tested backups. Backups in fireproof cabinets. Offsite backups. Backups! This costs £1400/TB/yr apparently: you can put it in your grant proposal. The hard sciences aren't holding back: the physicists here are about to take possession of 160TB from Manchester apparently. And, just as a CD in the post used to be quicker than dialup, so is it still quicker to stick a server in a van up the M6 to go and get it, than max out the university's bandwidth for months on end. The biologists have just booked 4TB for 200 Drosophila genomes. Moar! At least I hope we can all agree that Drosophila are so stupid and shortlived that they could care less who, what, where, how and why someone is hosting their data. Humans, naturally, are more tricky beasts. If you care to study them—and publish the results—some closely argued rhetoric for the ethics committee will be required, before working through a significant list of technical chores. Which is all as it should be, I suppose.
Publié par Douglas Carnall, @juliuzbeezer à 15:00 Aucun commentaire: