on boredom while cycling 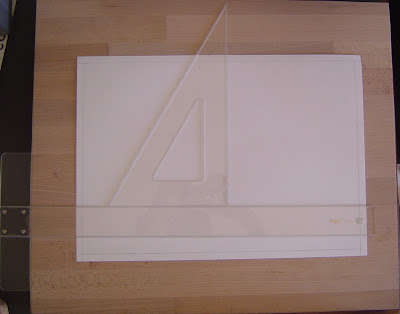 That's twice I've been told now, in the last year, by people I care about—my nephew and my lovely—that they can be bored when they are riding a bike. This has happened to me in the past, but very rarely—I hesitate to say never—does now.

I've made a start on trying to explain why that might be: 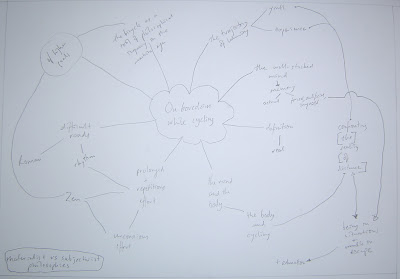 M. Cameron and M. Clegg's love-in was most moving and affecting. We watched the complete press conference coverage as part of an hour on the UK election I curated for Madame Beezer yesterday evening.

I have not seen M. Clegg speak at any length before, and he is most able and inspiring. Madame Beezer accused him of being a mumbler, but he was clear enough to me. He does say "you know" a lot in unscripted speech, a verbal tic that is irritating if pronounced. This is occasionally shortened to yeena and then abruptedly swallowed, presumably because some political coach has advised him not to say "you know," and he tries consciously to suppress it, not always succeeding. It is perhaps an irony that his accent, if this is possible, sounds posher than Cameron's.

As after M. Obama's inauguration, one left with an impression of intelligence, ability, and good intentions, even if these are mired in false ideology and bankrupt culture. My mood after watching them was better than before I started, which is pretty rare praise I assure you.

Whether the first coalition government of the UK for sixty-five years can endure is still an open question. Their differences on many issues, and particularly on electoral reform and Europe, could not be greater. M. Clegg does indeed hold an axe over M. Cameron's continuation in office, but it is an axe he can only wield once. The announcement that their package of electoral reforms will include introducing fixed term parliaments is in fact a concession that secures M. Cameron's position rather more than it does M.Clegg's, though he has played a very good hand in the negotiations since the election. One undoubted effect of coalition government is that formal decision-making returns to the place it properly belongs in the UK system: in its Thursday morning cabinet meetings. This should be an advance on the sofa slackness of recent years.

Both men were full of the need to govern with "fairness" in the "national interest", each man repeating the phrase at least twice, as though that were some uncontentious catechism. I prefer the term the "public interest." Although on an island it is easy to make the fundamental error that the two concepts are contiguous, they are not. In an age of atmosphere change and peak oil, perpetuating the error will doubtless have grave consequences.

It will be interesting to see what the new administration makes of the results of the Chilcot inquiry. M. Clegg's party will hopefully ensure that no part remains buried. Whether we shall have legal opinion thereafter advising that the prosecution of the key players would be in the public interest is another question. The political class naturally reject this option with horror. Peaceful transition between successive administrations (rather than bloody coups) IS the hallmark of democratic government. Threatening to jail your opponents if you win the election has an understandable chilling effect on the political discourse. The world finds that sleeping dogs must be left to lie.

But we do not, of course, have to accept their lies. The point of prosecution is above all to state society's disapproval of the crime, not necessarily to punish any individual involved.

In praise of... M. Dennis Skinner MP (with an eye to his successor upon retirement)

If there is ever a wikipedia page more entertaining than this one do let me know. M. Skinner's catalogue of parliamentary heckles down the years are most amusin' and affectin'. He is like a trusty family retainer, charged with the supply of shafts of wit on state occasions, Black Rod's very own poet laureate. It is sad that one day he will have to retire, but nevertheless the rest of us must give some thought to his eventual successor. I saw no reason why this online Guardian article should be so down on the estimable M. Brand as a contender for replacement "Beast".
Publié par Douglas Carnall, @juliuzbeezer à 22:53 2 commentaires: