On riding safely in difficult conditions

from the department of roadspace carving

No.5- Yet another #closepass Driver trying to overtake as road narrowed. Hooked handlebar, bike wedged under his wheels, I tried to bale and was dragged along. Police said 50/50 blame! I showed the video. Changed to 3pts & £100 #greenock #inverclyde @TakeThatCyclist @ClosePasses pic.twitter.com/BlTZ5uP067
— Father Spodo Komodo (@fathersensini) September 13, 2018


A cyclist is riding along a busy single carriageway road in wet weather. He is overtaken too closely. The overtaking driver then instantly forgets the cyclist, the road narrows, the overtaking vehicle moves left, and knocks the cyclist down. Fortunately this cyclist incurred only minor injuries, and the driver was prosecuted, though only because the cyclist had video evidence. All most regrettable.

But—and I'm writing this here because the brevity of the Twitter risks rapid descent into accusations of victim-blaming—there are a few learning points for all cyclists. While the van-driver should not have acted as he did, and is undoubtedly to blame for the crash, there are a few things you can do as a cyclist to avoid such hazard.

Firstly, it is a good general rule never to pass a parked car closer than the radius of a car-door. "Dooring" (having a car door opened into your path) is a real risk, and a nasty injury-prone crash if it does happen. Riding wide of parked cars eliminates this risk entirely. But the cyclist in the video is riding too close to the parked cars in my view.

Now, why did he do this? The answer, of course, is that it is easy to feel intimidated by vehicles behind you. Drivers rev their engines, follow too closely, or even sound their horns to try to get you to move out of the way. This is physical intimidation! Resisting it is easier said than done, and requires both mental and physical strength.

But it is the driver that does not see you that will kill you, and the further out into the carriageway you ride, the closer you are to the following driver's central field of vision.

I entirely understand also, that my view is formed from my own experience as a) a person naturally endowed for cycling (a moderately athletic male adult); b) a trained motorcyclist (it's easy enough to take the lane with a BMW R80RT between your legs I assure you); c) a person who sees very clearly that the private motor car has no place in the urban environment in a democratic society, and is willing to put body and bike on the line to state this. Having the physical strength to "keep up with the traffic" in short bursts does make the cyclist's life easier in present conditions. But there is no *minimum* speed limit on any urban road, and as cyclist you have a perfect right to use the carriageway appropriately, whatever your habitual cruising speed. Both the British and French highway codes lay great emphasis on the fact that overtaking is the most hazardous manoeuvre, and clearly lay the responsibility for doing so safely with the overtaking driver.

Secondly, once the parked cars have been overtaken, the cyclist moves left, thus inciting the overtaking manoeuvre. But had he anticipated the narrowing of the road ahead, he could have instead maintained his line to occupy the centre of the narrowed lane, averting any illusion in the mind of the van driver that this was a good time to overtake. Which it obviously wasn't.

And thirdly, having carved that space, should idiocy arrive over your right shoulder in the form of an inappropriately overtaking driver, you have a space to move into, not the obstacle of the kerb immediately to your left.


What is to be done?

Many people watching this video will interpret it as evidence for the implementation of "protected infrastructure" (i.e. a kerb-separated lane for bikes on the offside of the road). But this is not the only possibility, and such lanes create new problems of their own, particularly when carriageway and bike lane arrive at junctions, which become more complex as a result. In practice such implementations tend to impede the progress of the cyclist compared with the progress they might make on the road.
The elephants in the room here (as ever) are the contribution the parked vehicles made to the crash (on-street parking is a curse), and the sheer volume of motor traffic (this can't go on). Both driver and cyclist are victims of a transport "system" based largely on private motor vehicles that is incompatible with an egalitarian society. Driving in town is only even possible because some people are not driving cars. A town where all trips are made in private cars looks like Los Angeles, not Greenock.

And of course the law should be changed to put the presumption of blame on the user of the motor vehicle in the event of a collision with a pedestrian or a cyclist, as is the case in France or the Netherlands. With great power comes great responsibility!

These are amongst the most difficult and demanding conditions that a cyclist could face anywhere. One can understand the popularity of the four-wheeled metal umbrella as a default mode of transport in the west of Scotland, but it's not progressive, and it's got to change. 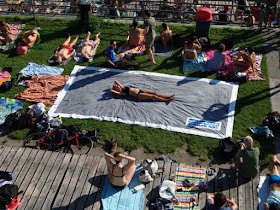